Who Is Ladybug Limited? 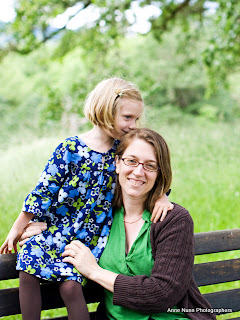 Ladybug Limited is the creation of Diana Strand of Corvallis, Oregon.  Diana is the wife of a Lutheran pastor and a mom to 2 children, "Mugger" and "Bug."  It was because of Bug's desire for all things girly and cute that Ladybug Limited came to be!  Diana is more of a no-frills gal but also a bit of a fabric hound (rather ironic, considering she doesn't sew), so fabric button hair accessories became the girly medium that Diana used to delight her Bug.
Before the move from Orange County (CA) to Oregon, Diana was a Spanish teacher.  She still does some freelance Spanish teaching, both at her children's school and for adult learners in immersion-type classes at her church.  In addition to running her Etsy shop, Diana also is a substitute teacher, so the label "work-at-home mom" doesn't totally fit, but it's the best she can find for now.
So many part-time pursuits don't leave time for much else, but Diana also enjoys kids' books, running, family camping and hiking, and blogging about craftiness and other endeavors.

This site contains lots of Ladybug Limited info (like my ribbon clips catalog and all the highlights up in the tabs), but my Etsy shop updates and news about local events are being posted on my shop's Facebook fan page. See you there!

If you saw me at a Corvallis area show and are looking for something not in my Etsy shop, just e-mail me and I'm happy to do a custom order for you.
Ladybug Limited on Facebook

...on my other blog:
Holes in my Shiny Veneer